In these series we are going to setup a Debian based personal server with security in mind. The series will include basic setup of a Debian system, networking and firewall, isolating services in containers (nodes), docker/kubernetes/containers within isolated nodes.

The OS used here is Debian 11. In order to make all the steps reproducible, we're going to use a clean Debian install in a virtual machine. 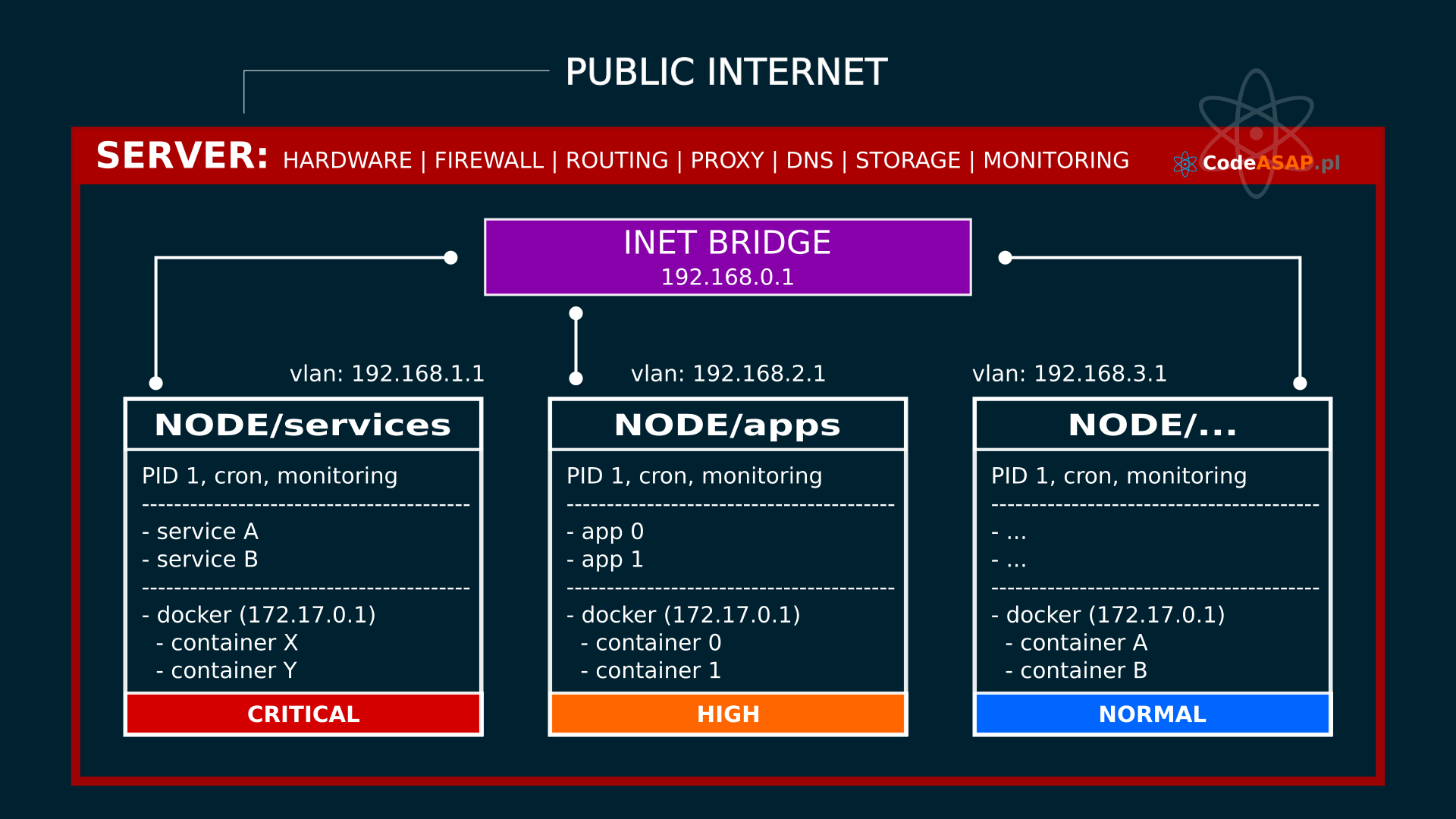 Nodes are subsystems isolated from the main host. They might be virtual machines or containers. Nodes have static IPs. They are "regular" systems: they run a proper init, may use their own firewall rules, they run cron and so on. Other services and Kubernetes/Docker/containers are run within these nodes.

I'm not setting up a "big computing" infrastructure but a personal server. I will be running a mail system, a web server, couple of applications, video/streaming software, databases, containers, etc.

Pid 1:
I want the nodes to be regular systems with init scripts and proper service supervision.

Cron:
Operating systems include basic reporting/monitoring scripts by default (cron jobs). Many other things depend on cron (renewal of certificates, rotating logs, etc.). I also schedule a few of my own scripts that help me monitor the state of the server/apps/access.

Separation:
Some processes are much more important than others.

Main host will have a bridge interface. All nodes' interfaces will be attached to this bridge and the transmission will be handled by the main host (NAT, firewall, routing, filtering, logging, ...). The firewall will be built around the default DROP policy (from anywhere to anywhere), only essential ports will be enabled (in and out). The services running within the nodes will be exposed by port-forwarding. The main host controls the network while the nodes may setup their own firewall rules in their stacks. No, docker doesn't touch the firewall on the main host.

There are bots, scanners, malicious actors and state sponsored attacks. Dystopia.
Skipping the philosphical dwellings on the state of nature, just wars and aggressionism:

Skipping all the hardware/hosting choices - I am doing everything from scratch on a clean minimal Debian 11 system.
You may run it on a real machine, a vps or your own vm. My initial installation includes only basic utilities (not even a ssh server).

This guide assumes you are able to access the server emergency console. I'll be executing all the commands in the server as root user. Any "tricky" moments will be noted.
The guide will be divided into separate articles in order to analyze and discuss various aspects.